Former doctoral students at the Institute of Finance, Banking & Insurance at WU Vienna discovered an open demand in the market in the course of their academic work and, subsequently, founded a company. FINcredible enables sustainable and responsible lending & borrowing practices and thereby also promotes financial literacy in the process. Furthermore, the scientifically based analysis of banking data makes customer onboarding easier and more efficient in other industries, such as eCommerce (e.g. for the mega-trend: subscriptions) or Real-Estate. We met the founding team (from left to right: Alexander Eisl, Stephan Gasser, Valentina Gasser, Karl Weinmayer & Christian Ochs) for an interview and talk about their motivation and learning.

WU Blog: How did your founding idea come about?

Alexander Eisl, Stephan Gasser, Valentina Gasser, Christian Ochs & Karl Weinmayer: The four of us had known each other for years through our doctoral and PhD studies at the department. At some point, we had started to meet regularly to exchange ideas about innovations & startups from various fields. The announcement of PSD2 (Open Banking Initiative) was already very exciting for us from a scientific point of view. But when Alexander Eisl (one of the founders) was also looking for an apartment at the time, and had a lot to do with brokers and salary statements, we quickly came up with the idea that a bank data-based and data protection-compliant solution could bring many advantages. This idea grew, and FINcredible was born – today, of course, our solutions go much further, and can be integrated into any website and system for credit applications, online trading, and real estate. Point-of-sale solutions for in-store purchases are also possible. We thus offer the analysis and quality of banking data in all areas of life.

“We really wanted to know if something could come of it.”

WU Blog: What motivated you to pursue entrepreneurship out of your academic role at WU Vienna and found an academic spin-off?

Alexander Eisl, Stephan Gasser, Valentina Gasser, Christian Ochs & Karl Weinmayer: As academics, we are used to being very critical at times. After we first had the idea, there were still many meetings where we tried, sometimes quite intensively, to question the idea. But the case held up and actually became more and more solidified in our minds. In the end, that gave us the courage and motivated us to really try it out. We then really wanted to know if something could come of it.

“The combination of the idea and the team was then decisive.”

WU Blog: Was starting a business always an option for the founding team? Or how did the decision to become entrepreneurial come about?

Alexander Eisl, Stephan Gasser, Valentina Gasser, Christian Ochs & Karl Weinmayer: Actually, none of us was necessarily looking to start a business beforehand. This probably resulted, as so often, from the situation and the desire to implement a vision together. For us, it was important from the beginning that the four of us found a company together as a team, because we had already worked together on several research projects in the past, and the chemistry between us simply fit very well. The combination of the idea and the team was then decisive.

WU Blog: How did WU Vienna and the WU Entrepreneurship Center support you in starting your own business?

Alexander Eisl, Stephan Gasser, Valentina Gasser, Christian Ochs & Karl Weinmayer: Our colleagues and direct supervisors actually supported us from the beginning on a personal level through motivated shout-outs and also gave us feedback in your free time. At the WU Entrepreneurship Center, the numerous events gave us a good idea of how to present our idea to potential investors and customers and what questions to ask in order to further elaborate our idea into a business model.

WU Blog: What problem do you solve with your product?

Alexander Eisl, Stephan Gasser, Valentina Gasser, Christian Ochs & Karl Weinmayer: FINcredible is an Austrian fintech startup and the first or so far only account information service in Austria licensed with the Financial Market Authority. Based on the Open Banking Initiative, we have developed scientifically based creditworthiness solutions for private individuals to provide companies but also consumers themselves with relevant creditworthiness information under full data protection & transparency when concluding business transactions in all areas of life (e.g. loan application, rental contract, eCommerce, …).

In doing so, we attach great importance to lean & fully digital process handling. This enables us to provide meaningful and relevant creditworthiness information directly at the PoS – whether on-site or in the webshop – in a matter of seconds, while simultaneously handling full data protection management for our partners.

We are currently active in several markets in Austria and Germany, such as real estate (www.mietcheck.at), eCommerce & Mobility (processing of subscriptions) and credit brokerage (KSV1870 InfoPass for financial service providers together with our partner, the Kreditschutzverband von 1870). In the near future, however, expansion into the entire EU is to follow. To this end, we have just recently entered into a cooperation with Klarna as a technology partner in order to focus on our core business, data science and risk management with bank data, and to be able to expand even faster.

“The time at the university is basically very good for pursuing any startup ambitions. You are in a very constructive environment at WU.”

WU Blog: What advice would you give to your academic colleagues who want to commercialize their scientific research results?

Alexander Eisl, Stephan Gasser, Valentina Gasser, Christian Ochs & Karl Weinmayer: There are certainly a variety of exciting business models behind research results. On the other hand, it is important to understand that a scientific contribution is of course not always synonymous with a solution that addresses a problem on the market and for which there is a buyer. Therefore, we think it is very important, especially at the beginning, to seek exchange with colleagues and acquaintances to get feedback and to validate whether there is a gap in the market. This process can sometimes take longer. In answering this question and further developing our idea, the Lean Canvas concept, for example, helped us a lot. There, the right questions are asked and you have to think about topics that go far beyond the scientific aspect.

It is also advisable to go to startup events from time to time, such as those organized by the WU Entrepreneurship Center or Austrian Startups. There, you can casually exchange ideas with other startup enthusiasts and make contacts. If your own idea is mature enough, it can’t hurt to put yourself on stage at startup competitions. This brings good visibility and practice for the important investor pitch that will hopefully follow afterwards. Open communication and feedback from third parties is hugely important.

In our own experience, the time at the university is basically very good for pursuing any startup ambitions. You are in a very constructive environment at WU. It’s a big challenge, but it’s very exciting, and we’ve definitely developed a huge respect for all the founders who have dared to give it a try. 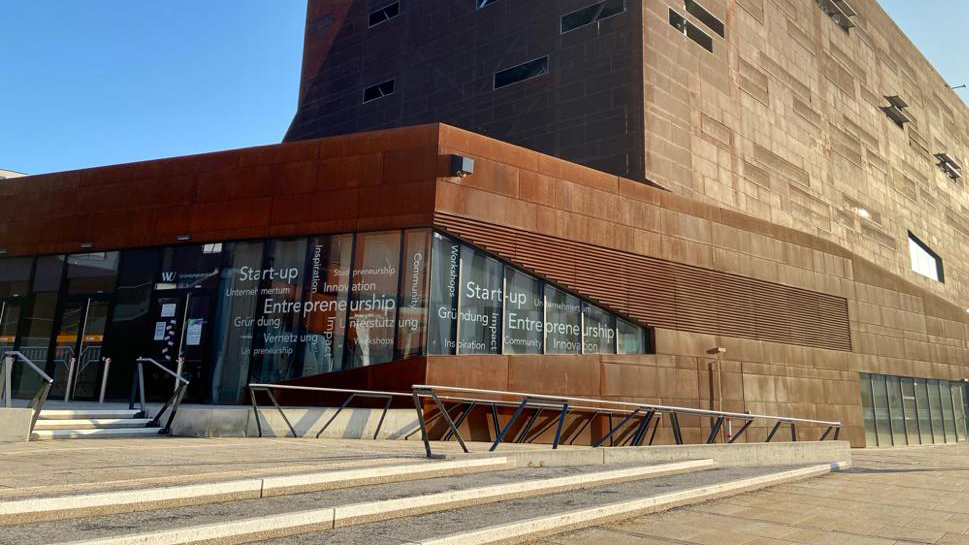 Entrepreneurship encompasses entrepreneurial thinking and action and is an attractive career option both for students after graduation and for scientific staff. The usage of scientific research results in the context of a spin-off is often an attractive option that is not yet used very often.

FINcredible in the final of Falling Walls

As WU Entrepreneurship Center (WU Gründungszentrum) we are especially proud of the academic spin-off of WU Vienna, that’s why we nominated FINcredible for the Falling Walls Conference 2021 in the category “Science Startup (Falling Walls Venture)”.

Falling Walls is an international conference that connects science, business and society through a shared commitment to create breakthrough solutions to challenges that cross borders and disciplines. Each year, twenty of the world’s most advanced scientists* and boldest visionaries* take the stage to present their scientific breakthroughs from a wide range of disciplines. That’s why we are especially happy that FINcredible has been selected for the finals.

We are keeping our fingers crossed for the entire team to make it to the conference.