When I started the CEMS/Master’s in Management programme at WU, I was immediately inspired by the CEMS spirit and driven to become part of the CEMS Club, the student organization of the programme. I have always been especially interested in the Alumni Relations division, as I truly believe that the insights of people, who previously went through the same academic paths, are the most valuable and genuine for us, students. After being a member of the Alumni Relations team, I headed the division in Vienna and then co-headed it during my exchange at Bocconi University, in Milan. Back in Vienna, I have been supporting the current Alumni Relations team and I am really proud to write about a major global event organized with the purpose of fostering student-alumni relationships within the CEMS community. 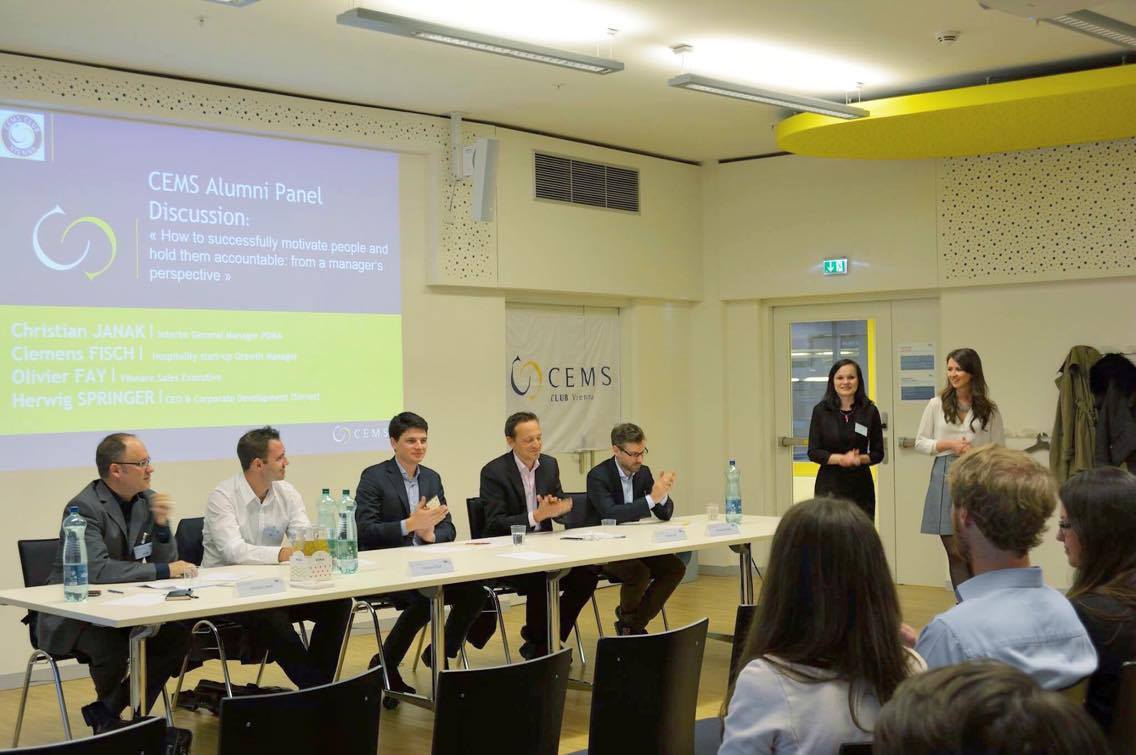 Recently, with the global CEMS alumni community surpassing the 10,000 mark after the 2015 St. Petersburg graduation, the student-alumni engagement has been defined as one of the top strategic priorities for the future of the Global Alliance in Management Education in order to create opportunities for ongoing interaction and build long-lasting relationships between current students and alumni. For this purpose, between 4th – 10th April 2016, the first ever CEMS Global Alumni Week (GAW), an initiative of the Alumni Relations Division of the CEMS Student Board, took place in all of the 30 member schools of the CEMS network. In Vienna, the first highlight of the Global Alumni Week was the Alumni Panel Discussion, which was organized by the Alumni Relations Team of the CEMS Club Vienna. The panel speakers, Christian Janak (Interim General Manager at Pona), Clemens Fisch (Hospitality Start-up Growth Manager), Olivier Fay (Sales Executive at VMware Central- and Eastern Europe) and Herwig Springer (CEO Corporate Development at i5invest), all of them CEMS alumni representing different cohorts and, thus, generations, shared their unique experiences from diverse sectors on how to motivate employees and hold them accountable from their very own management perspective. It was an insightful evening, which was concluded by a networking dinner, fostering the ties between current CEMS students and alumni in an informal setting.

The second highlight of the CEMS GAW at WU Vienna was a series of workshops focused on the topics of effective leadership and the role of the brain as the driving force in management, which gave alumni and students the opportunity to enhance their personal and professional skills. The skill seminars, led by experienced executive coaches, not only allowed alumni to enjoy a day back at university, but also to reunite, get to know current CEMS students and strengthen the CEMS spirit overall.