A Yankee in the Habsburg Court

Despite difficulties, this has been one of the greatest opportunities of my life. The faculty, staff and students have treated me both as a friend and honored guest. I am thankful to the Austrian Fulbright Commission, Vienna University of Economics and Business (WU), the Economics University of Bratislava, as well as Kathryn Hall (former ambassador to Austria) and her husband, noted entrepreneur Craig Hall, for making this possible. I am forever changed and grateful.

In Vienna. We hopped over to Vienna to begin our new life as temporary Central Europeans. The first week I spent with the excellent Austrian Fulbright Commission staff being introduced to the culture, history, and practical matters of teaching in Austria. We were invited to the American Ambassador’s residence and the next week I was scheduled to teach at the Economics University at Bratislava.

The following week I went to Vienna University of Economics and Business (WU) to meet the faculty, staff, and Ph.D. students of the Strategy & Innovation as well as the Entrepreneurship & Innovation centers. They had my office set up with everything I could hope to use. My own personal guide showed me around the magnificent campus. As both departments had lunch together, I felt blessed to be with such a great group of people. My home university, The College of William & Mary (royal charter from 1693) has Ph.D. students in other areas but not in the Mason School of Business. The opportunity to work with Ph.D. students was especially appealing. We discussed the plans for the week including my presentation in their lecture series as well as my upcoming classes for a Ph.D. seminar and an undergraduate class.

Hurdle #1. I took the U-Bahn home to the Meidling area but felt my decreasing vision had gotten to the point where I might need a professional to confirm my own prognosis that it would get better soon. (Aside: I have found being pig-headed is a great quality in many contexts. I have often had success with ignoring most minor problems and moving forward – I am a big fan of figuring things out as you move ahead. Getting through Ph.D., etc. my problem is recognizing the tipping point when small problems have become large problems.) Well past the tipping point, my eye was at 50% vision.  At 15:30, I stopped in a small optometrist’s office. He realized I had a potentially serious problem and made an appointment for me that afternoon with an ophthalmologist and professor. The ophthalmologist diagnosed my problem and obtained an appointment that evening with his friend, a surgeon, at a world class eye center. I will always be thankful for the efficiency and quality of the Austrian healthcare system… but I was very disappointed to delay my public lecture that week.

I had multiple holes and general loosening of my retina (lining inside eye). I spent the week in the hospital where they wanted me to limit reading and walking so as not to shake my eye – one of the toughest prescriptions to fulfill for an academic. Finally, out of the hospital, I spent the next two weeks as my eye (filled with gas to maintain shape after laser surgery) was naturally replaced with liquid. 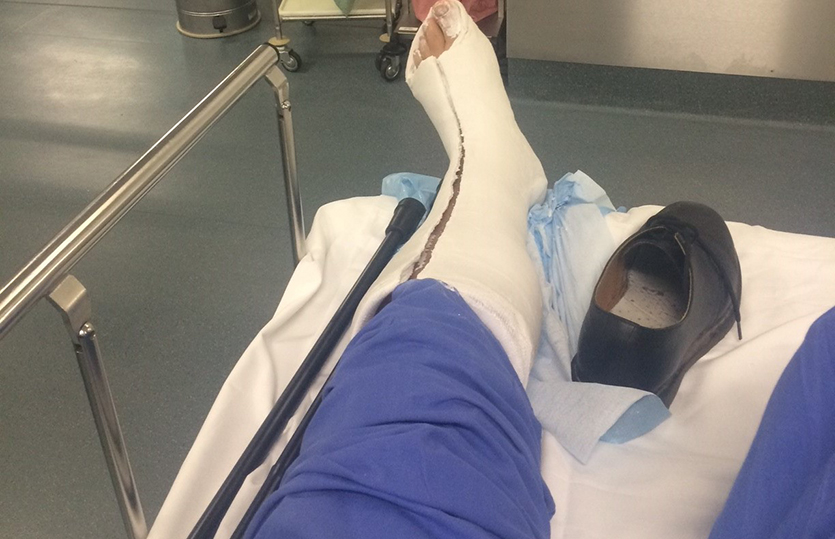 Finally, down to business? During the two weeks of post operative recovery, I began meeting with the Ph.D. students individually to get an understanding of their work before we met as a class.  I also took part in a video that was being made for the Austrian Fulbright Commission’s upcoming 65th Anniversary. On weekends, my family and I would take trips to see castles (e.g., Lichtenstein, Kreuzenstein), museums, and festivals. One weekend we decided to see Neuschwanstein Castle in Füssen, Germany and stop by the salt mines in Salzburg. This turned out to be a highlight other than as I hopped onto the little train to return to the surface from the mine, my foot slipped, my ankle turned sideways, and I drove my foot into the ground to catch myself as my face sped toward the rock wall. I hobbled out of the mine on Sunday and decided after soaking it for three days in cold water that something worse might have happened. My Eye Center physician friends could not help me, nor their walk-in service, so I was forced to go to another hospital across town, KBW. I ended up with a cast up to my knee and a prognosis of it staying there for six weeks.

Class starts. I now had to deal with one of the hazards of being an academic – a past focus on my mental strength rather than my physical prowess. The last time I had used crutches was in junior high school. My undergraduate class started on Monday and to avoid being stressed I took a taxi. After class, I headed home through the U-Bahn system. What normally took ½ hour took 1½ hours. I was sweating, my arms were trembling, and I felt completely rung out…though, it was a great full body work out. While I loved getting back in shape, I took a taxi to school and back the next two days.

I had a great week with the undergraduates teaching international entrepreneurship with an inspiring simulation that really got them engaged. I had lunch with several and appreciated their intelligence, international make-up, and general excitement for the topics.

Ph.D. class begins. The next week I started in with my Ph.D. class. The make-up of the class crossed several departments and multiple universities. We reviewed innovation and design literature, examined the successes and failures of my own career, as well as evaluating the presentations of each of the student projects. I had a great time with them and continue to work with them toward an improved draft of their projects for submission to an English language journal. I also attended the 65th Anniversary of the Fulbright in Austria – a great event that led to my fellow Fulbright Scholars and staff to assess my weakened physical state and wonder whether they should take my Fulbright award literally and only allow me a “chaired” position (sorry for this terrible pun).

Address in Bratislava. The following week I was asked to deliver an address back in Bratislava for their 75th Anniversary and the associated International Scientific Conference of the Faculty of Business Management at University of Economics in Bratislava on “The University’s Role in Supporting the Next Generation of Entrepreneurs.” I saw a number of faculty again that I had shared research discussions and had visited their classes.

Weihnacht in Wien. The day after I returned, I got the cast removed, though still using crutches, and headed off for a classical concert at St. Stephens Cathedral where I had both my wallets stolen. First time in 25 years of international travel that I had been pickpocketed (from a front zipped pocket). I had gotten lazy and lulled into taking for granted that all Viennese were lovely people – when in fact there are a few with light fingers. I decided to enjoy the concert anyway and walked over to the closest police station afterward. Upon giving them my name, they handed back to me my metal case with my credit cards and all identification fully intact (an immediate answer to prayer). Alas, my leather wallet was still missing. One week later (Christmas eve) I received an email from a man in Vienna who had a Christmas tree delivered – stuck to the branches was my leather wallet – he agreed to send it back.

My dad, mom, and cousin came to visit for Christmas and a brother and his family came after Christmas. It is wonderful to be able to share Vienna with my family and have them here for the holidays. Vienna absolutely delivered the most memorable Christmas.

Thoughts on concluding my adventure. After Christmas, I am looking forward to continuing to meet with the Ph.D. students and help them get closer to being able to submit a manuscript to a journal – the major goal of the seminar. I may offer my delayed public presentation at WU. Finally, I plan to continue to enjoy the best of Vienna. I still have not gone skiing – the doctor said it would be the safest sport (for my foot at least). Again, I am grateful to all that made this experience not only life changing but memorable in a way that only friends and family could do for me. I look forward to continuing to be an informal ambassador for Austria back in the US.