Those were the days: A field trip to Budapest, the vibrant heart of Hungary

To investigate current management challenges, the students of this year’s Master Class CEE conducted their first field trip to the shining city of Budapest in February 2020. We visited companies and state agencies, explored the famous ruin-bar nightlife of Budapest, and became a group of friends.

Coming from Vienna, we noticed the cities’ shared past of the Austro-Hungarian Empire. The wide avenues, the small cafés, the shared architectural style – it does neither look nor feel too different walking through the inner districts. However, the differences between Buda and Pest parted by the Danube creates a unique atmosphere in this city.

Our first trip after the city tour led us to Siemens’ power and gas turbine manufacturing plant. We were warmly welcomed by the plant manager and CEO and got a tour through the plant. We learned about the challenges of manufacturing the turbine blades used in powerplants worldwide to secure our electricity supply. In the afternoon, Professor Stocker showed us the historical building of Corvinus University and gave a presentation about successful Hungarian companies – (hidden) champions in their market.

Next up, the WU Alumni Hub in Budapest organized a get together at the UNION VIG Insurance. Senior managers from UNION and Erste Bank showed us how to run a subsidiary of a foreign MNC successfully – and all the smaller and bigger challenges you have to face when doing business in CEE. We ended with a macroeconomic analysis by a portfolio manager, focusing on Hungary’s efforts to catch up with Western Europe. 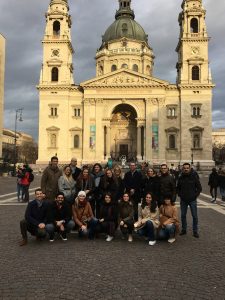 Hungary is more than just Budapest

During our first activities, we heard several times: “Hungary is not Budapest,” and we all were curious as to what that meant. The next day, this question was resolved during the presentations at the representative of the Austrian Economic Chamber and the German-Hungarian Chamber of Industry and Commerce (DUIHK). The competitiveness of many regions in Hungary is – especially in Eastern Hungary – rather weak, and the government tries to support these regions with specific investment incentives. Dirk Wölfer from the DUIHK highlighted that within one hour north of Budapest, the GDP per capita drops to one-fifth of that of the capital city. Admittedly, the state is especially effective in securing EU funds for its underdeveloped region: with only about 1% of the EU GDP, Hungary receives approximately € 5 bn (3% of the EU budget) annually.

At the farewell dinner with traditional Hungarian cuisine and music, we prepared ourselves for the last day of our trip: at the Hungarian investment promotion agency, two consultants provided us insights into how Hungary cooperates with multinational corporations and what incentives the state offers for investors.

With all the new insights, we returned to the Budapest train station to complete our CEE experience on the “Transylvania” train (with 20th-century train coaches), in which we rode back to Vienna. Overall, the trip to Budapest made us aware of how “western” the East can be, and also let us explore the vibrant nightlife of Budapest. However, most importantly, we grew together as an amazing team of students.

If you have a vivid interest in Central & Eastern Europe and you want to gain relevant qualifications for a career in CEE please send your application by October 15, 2020 to kerstin.kvapil@wu.ac.at. Find more information here.